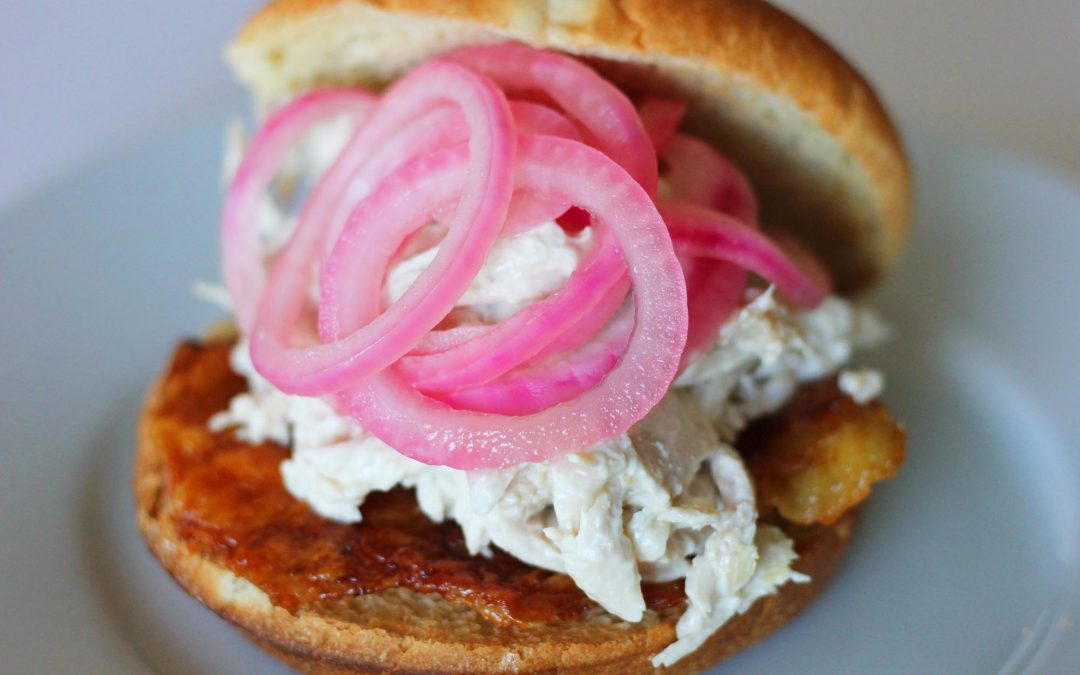 And an equally big letdown.

I was watching the food channel and happened to be tuned into a program that was dedicated to the ‘best’ all time chicken recipes. As I mentioned in a previous post, there are over 856 million published chicken recipes according to Google, so I was curious which recipes from the 856 million would be featured.

One in particular caught my attention as it reminded me of a really delicious ‘crispy chicken’ sandwich, which I’ve had more than once. The recipe featured on the program was for a sandwich which was made with crispy chicken skin from a rotisserie chicken and it looked like a lot less work than frying chicken pieces and then also crisping the skin.

Then the other ingredients, a mayonnaise based sauce, and a coleslaw. I substituted the coleslaw with a quick pickled red onion as I did not have any cabbage on hand.

I had a tough time figuring out where to put the crispy skin so it wouldn’t get lost, so ultimately, I followed the suggestion to use it as the bottom layer of the sandwich. If you look closely, you can just see that paper thin chicken skin crisp, and no, it’s not the toasted bun. Then I mixed the shredded chicken with the dressing, seasoned it and spooned a fair portion on top of the crispy skin. Then, topped the sandwich with the final layer of pickled onions.

It was a chicken salad sandwich.

If you love chicken salad and you have left over rotisserie chicken, this sandwich is a good solution, but it’s a lot of work for a lowly chicken sal san…

P.S. Since I had some chicken left, I decided to use plain old Miracle Whip and leftover pickled onions for lunch today. It was as expected, a chicken salad sandwich.