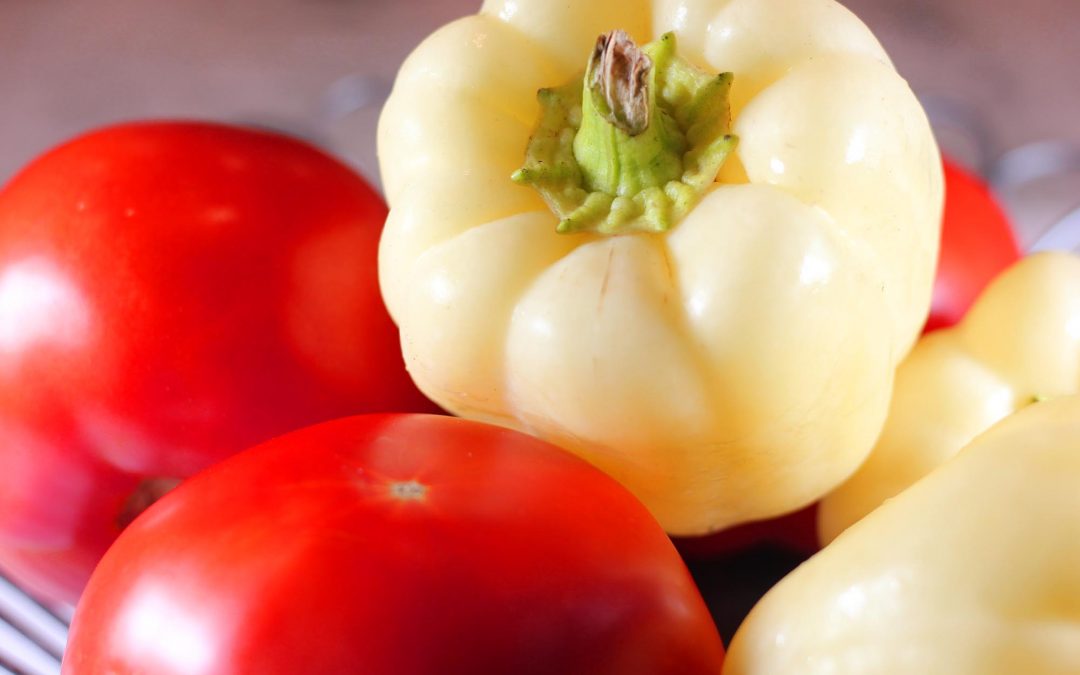 This photo of tomatoes and peppers captures the beauty of produce at this time of year. It’s also the only time of year when White Peppers are available.

White peppers invoke childhood memories as this is the only season when my Mother made three specific dishes. These were Stuffed White Peppers,  White Pepper and Pepperoni Lecho and of course the summer favorite, Tomato, White Pepper and Sweet Onion Salad.  Making these dishes any other time of the year was just, and probably is, not done. You have to wait until August!

I remember my Grandmother making Lecho and preserving this delectable vegetable dish in beautiful clear mason jars. They would be added to the rows of jars of cherries and apricots and peaches, which she had already prepared.

She used to do this, not so much from necessity, but more because she could and she loved the results.

Walking into her pantry was like looking at the wall of preserves and canned fruits and vegetables at Jamie Kennedy’s Wine Bar, for those who would remember!

You might be tempted to think that stuffed peppers are a winter dish, but au contraire, stuffed peppers should only ever be made in the summer and only with white Hungarian peppers!

White Pepper and Pepperoni Lecho uses the same delicious white peppers, but also ripe and juicy beefsteak tomatoes. You can add a little heat by adding a banana pepper and ‘allowing it’ to burst towards the end of the cooking time. A little heat is traditional and summery.

Then of course there are salads. Tomato, White Pepper and Sweet Onion Salad is another Hungarian summer classic, but there are others which include corn, tomatoes and nectarines.

All incredible fruits and veggies abundant only this time of year, enjoy!