The March of the Grenadiers 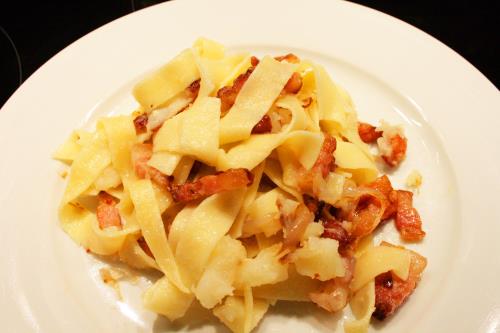 Grenadir Mars (pronounced Grenadier Marsh) means the March of the Grenadiers and a recipe from my childhood.

The name of the dish came to me out of the blue and was probably triggered by recipe for shaved Cauliflower and Parmesan Cream Sauce over tagliatelle. It looked like Grenadir Mars.

The three components in Grenadir Mars are egg noodles, onions  and boiled potatoes.  Impossibly simple and yet can be versatile.

I made it with smoked bacon and sliced shallots last night, but as a child, my mother served it with sugar sprinkled on top. I remembered this last variation as I read through some of the comments left on the recipe blog for this dish, good memories.

Incidentally, the shaved cauliflower recipe I mentioned above? I made it twice as it looked good, but after 2 tries, once per the recipe instructions, and once with my own variations, it unfortunately just looks good but it cannot be saved!

Another little note of interest, the name of the dish, meaning the ‘March of the Grenadiers’ apparently came as this dish was served often, too often, to soldiers during the First World War.