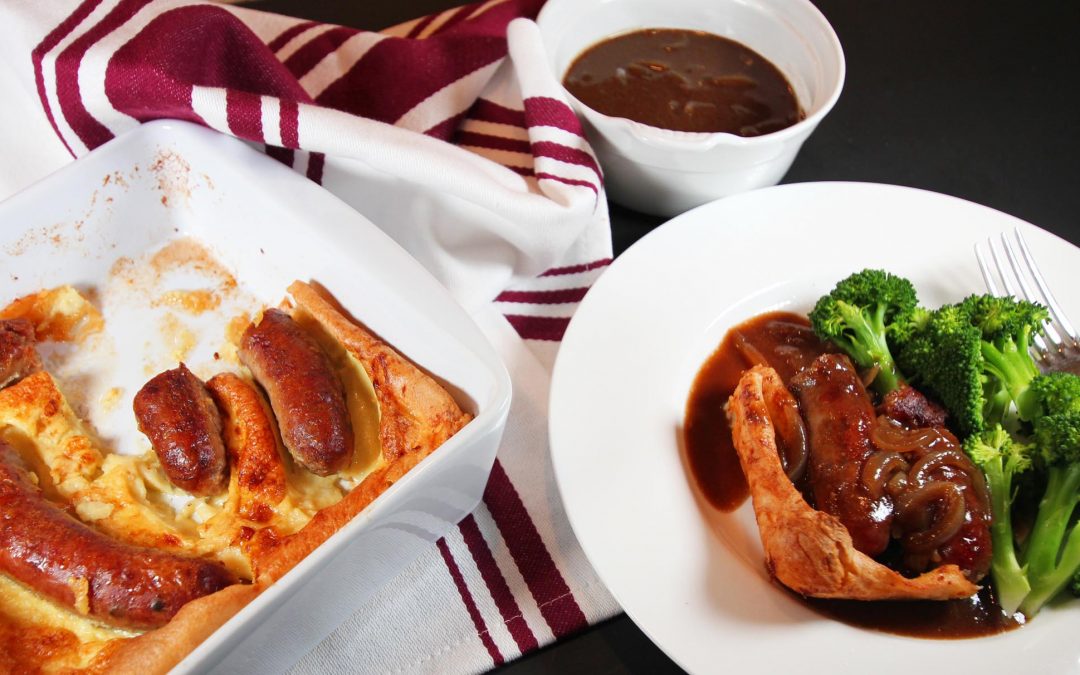 If you are British, you will understand, if you are not and have not let your imagination make you leave this post, read on!

Toad-in-the-hole is made with two of England’s iconic dishes, sausages and Yorkshire pudding. At the risk of making a dish which is best prepared by Brits, I did take a chance to make Toad-in-the-Hole for British friends, and I’m happy to say that we ate the whole thing,

I must admit, I changed a few things from the original recipe as I preferred my recipe for the Yorkies and I liked my brown sauce as a base for the gravy, but now I can honestly publish my way of making it, and oh by the way, it is delicious.

Because this was the main course for a Saturday lunch with our friends, I thought a few nibbles beforehand would go well with a glass or two of wine. I planned on making pinwheel pastry, which usually has a savory filling, and because I know that my friends are partial to Marmite, I used Marmite as the filling for one variety of pinwheels. Marmite is a spread which can be used on bread or as a flavoring for soups and gravies. It’s mostly salty and it’s used sparingly. Marmite truly is a British ‘thing’.

I also added a couple small bowls of savory store bought bites and prepared a small tray of  ‘Smoked Salmon on Crisps’.

To explain the name, when we were in the UK one year on business, our client asked what we would like to go with the ‘salad sandwiches’  that they were ordering in for lunch. We said chips and got French fries. Chips are fried potatoes, and crisps are potato chips. Hence the name Smoked Salmon on Crips. Salad sandwiches were exactly as they sounded, lettuce, tomato, cucumber, etc., with salad dressing. The sandwich was totally different and not a wholly bad change from the expected.

I served the Toad-in-the Hole as the entrée with some fresh broccoli and baby peas, with a gravy of Brown Sauce and red onion, drizzled over the sausages and Yorkies. I can tell you that all of our plates were clean, including mine, and I usually leave half of what I take.

We finished lunch with a Sticky Toffee Pudding, drenched in Toffee Sauce and topped with a scoop of soft vanilla ice cream.

Here is the full menu.

Popcorn in a Bowl

It’s fun cooking something totally out of character, for me anyway. Toad-in-the-Hole is just that kind of dish, it’s delicious and homey. The dish can be prepared to the point of baking ahead of time, so all that’s left is to sit back and chat until it’s done and ready to serve.