A Bad Day in the Restaurat World? 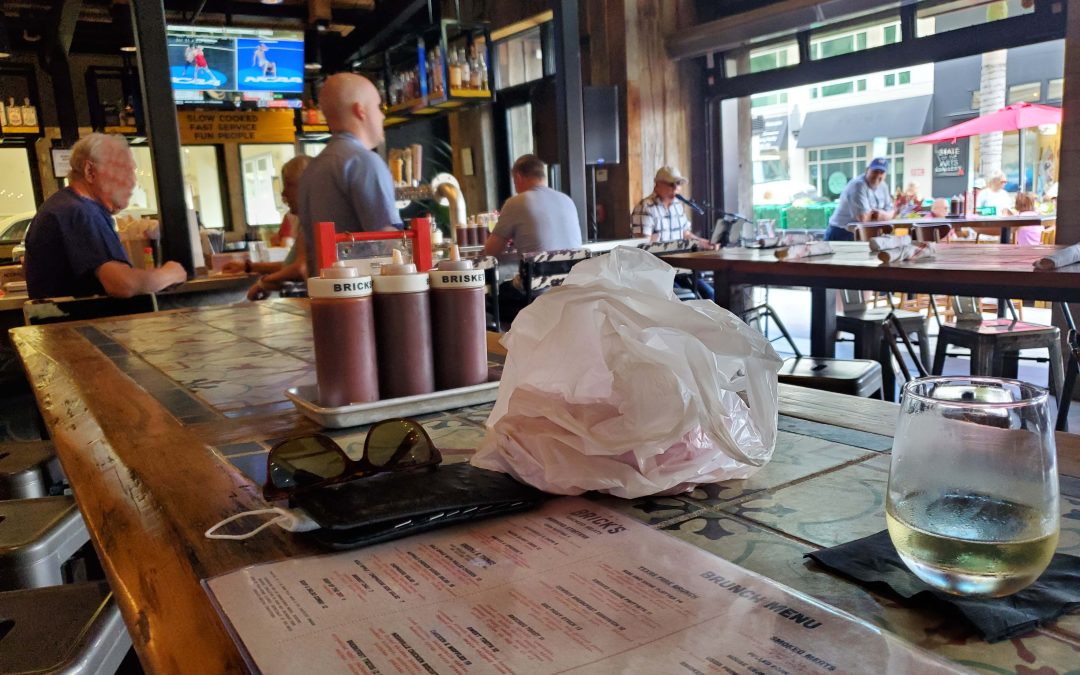 I remember 4 or 5 years ago going to the Saturday Farmers Market in Sarasota and winding our way down and around to State Street.  Back then, the ‘best’ green grocer was at the other end so were not trying to find them, instead we were following the intoxicating aroma of BBQ.

And back in the day, the BBQ was in a pop up and the chef was selling brisket almost faster that he could cut it. We chatted a bit, and he was visibly excited as he pointed to restaurant location just across the street. He said he had plans to open his first restaurant at that location the following year.  We did go after he opened and we had lunch (I don’t remember what) but we did buy some of the fantastic brisket from his takeout window.

So we have not been at the Market with the frequency that we used to go, it’s smaller now with fewer vendors, including the green grocers. It seems only the best one is thriving.

I actually had a plan to get veggies and have lunch at the BBQ restaurant again. We sat at one of their high top tables and watched as others like us made their way around the vegetable stalls and then to the cash.

I should have paid attention to the signs, as you can mostly tell whether you will have a good dining experience or not based on what others are eating and how it looks. I noticed that other diners around us were ordering massive portions of French Fries and huge stacked burgers. There were other items on the menu of course but I was searching for something truly Southern. I ordered their Fried Chicken and Biscuits. My Husband went with the Texas Trio.

We waited and waited a bit longer and then our orders were served. The first common and remarkable thing was that both dishes were lukewarm, not hot. I had images of fluffy biscuits and juicy fried chicken, and was disappointed with what looked like 2 cardboard thickness slices of biscuit, and I could barely find the chicken, which was over cooked and less than lukewarm.

I can tolerate most things, but one thing I cannot tolerate is cold food when it should be hot. When asked what I thought, I told them. Everyone hustled to get me a replacement order, which when served, was much like the first order, except that they had microwaved the chicken, but it was still overcooked and tiny and the server confessed that the biscuits were brought in frozen.

I was determined to make my own Southern Fried Chicken Cake Pan Biscuits and Hot Honey, just because by now, I was craving that delectable bite. I went to a bit of an extreme, but I just had proven that something so simple can be so good.

I’m not sure what happened, it was Saturday and brunch, and if they has a busy night the night before, the kitchen might have gotten a slow start.

I’m not sure that we will go back, it often takes years to gain a customer, and as little as 5 minutes to lose one.