A Bit of a Jungle This Year… 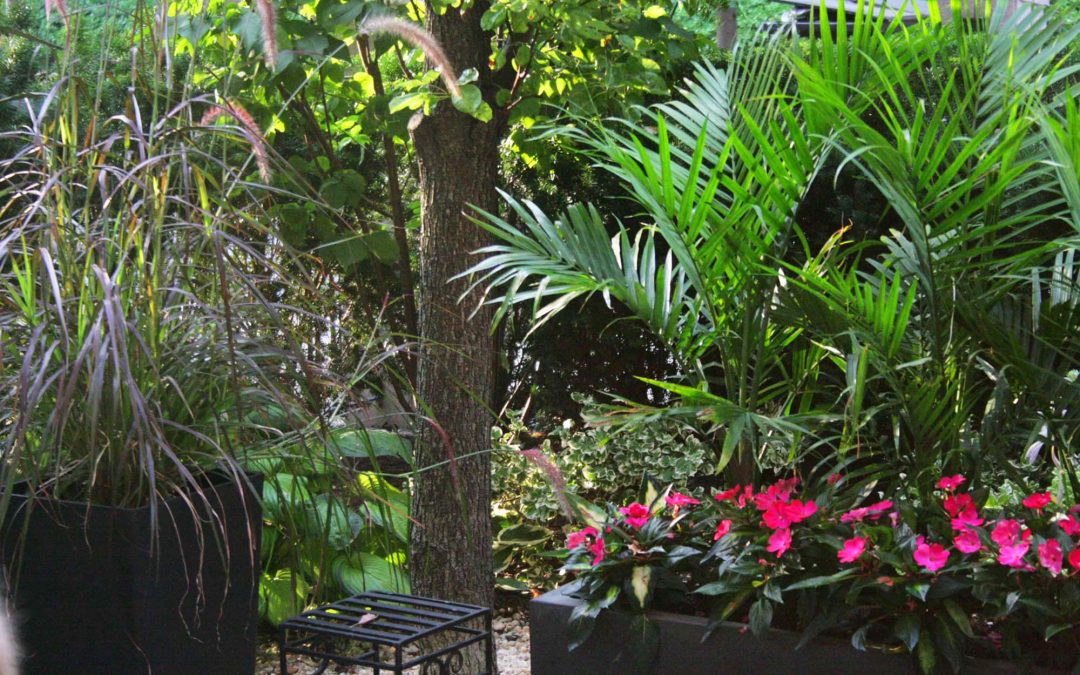 We came home late in July, and found nothing to plant at my garden center of record. I have purchased all my annuals, shrubs, trees, everything from this garden center for over 20 years. We were at the garden center within the first couple of weeks after getting home. After all, my planters were bare!

When I say nothing, I mean nothing. Not even the common variety palm ferns. Nothing flowering, the place was just barren. Certainly this was true for annuals. Perennials seemed better, but in my setting, perennials don’t winter in containers.

I was told that the moment that garden centers opened this spring, there were hoards of people standing in line, winding around the corner, and if it grew in a pot and could be carried, everything was bought up as soon as it was put out. Even stock that had been started for next year! Apparently, things are forecasted to be worse next year in the garden center business.

After much circling to find something for my containers, I settled on purple fountain grass and while they looked a little worse for wear due to handling,  I found four specimens in good shape. These would ultimately work for the smaller planters, which are the corner pieces for my terrace.

I had seen palm ferns at our local grocery store so I thought our next stop would be a grocery store. No luck after 2 additional stops, also no luck with finding my normal planting medium, Pro-Mix. I finally settled on a mix similar, so back into the city to our local grocer. Fortunately, they had lots of palm ferns, along with hanging pots of sunshine impatiens.

The next day I planted everything as rain was expected in the afternoon. My heart sunk when I saw the purple fountain grass flat as a pancake from the rain. Great! What now?

Well, I tried to get them upright, and was contemplating replacement, when over the next couple of non-rainy days, they started to behave and are fully upright now. I had to trim back some of the longer stems that had broken, but all in all, they look pretty good!

On the plus side, the rainy days earlier in the season created a wonderful, lush setting otherwise. The hedges are reminiscent of hedges you would see in Vancouver, and although I missed it, the Ivory Silk Lilacs all bloomed this year. Judging by the seed pods remaining, it must have been a spectacular showing.

So my urban garden looks like a bit of a jungle, but I don’t mind, I love green and when I go out to barbecue, it’s a little piece of paradise in the city.