I’m Always Looking for Something New… 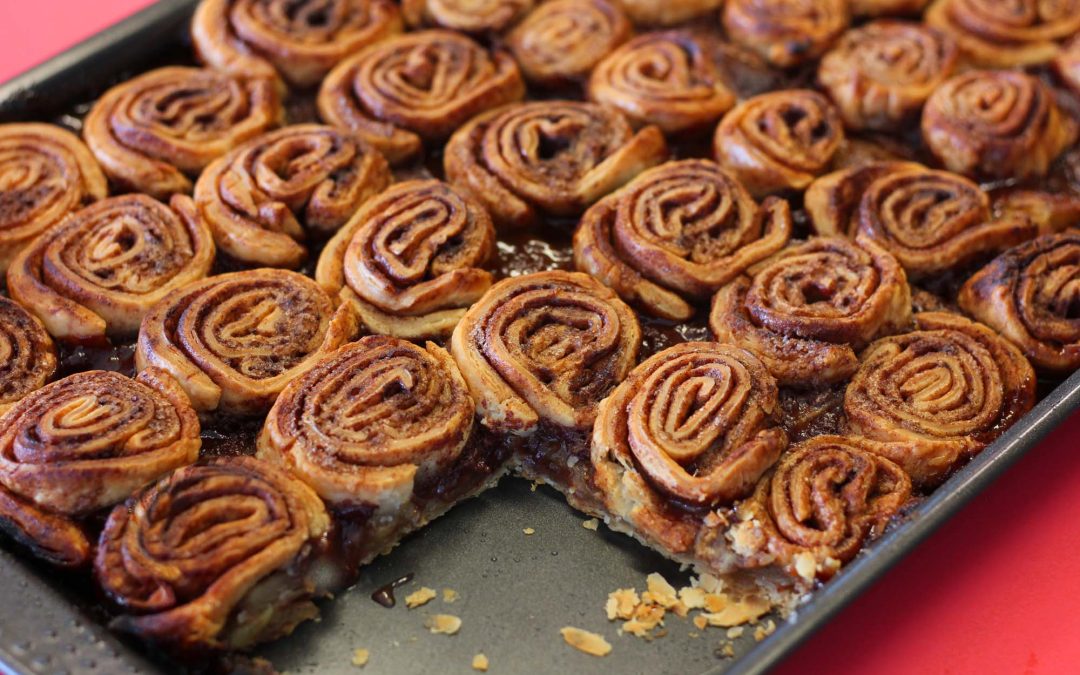 I am always on the lookout for a new recipe or an old recipe with a new presentation.

Sometimes I get caught by a new recipe, and by its presentation, and then regret taking the time to make the dish as in the end, it often looks better than it tastes. These recipes do not make it onto Inspired Cuisine.

I’ve been caught by a few different or new recipes over the last several weeks and found some that just didn’t live up to their promise.  I keep thinking that other cooks must also suffer from pretty but not necessarily good. That’s why I cook everything before I publish it.

The latest experiment however, was an old recipe, apple pie, with a new presentation. I really liked the look of this Pinwheel Apple Slab Pie and was sure with all the butter in the pinwheel topping, that the pie would be delicious!

I didn’t have the recipe, so I went with my interpretation of what it likely contained, which was fine. After all, it was apple pie.

The construction was a bit of a challenge.

I wasn’t sure how many rolls of the prepared Pillsbury pie crust (which I was planning to use), would be needed for the pinwheel topping, plus the crust, which was required for the base of the pie. I originally started with two packages, with each package containing two rolls, but then I bought another package just to be sure.

I also vacillated over the size of the sheet pan I was going to use, but the non-stick 10″ x 14″ sheet pan won over the smaller pan as even with a parchment liner, I would still have to scrub baked on sugar and cinnamon.

The rest was relatively easy, after a small misstep with the topping.

I originally rolled out one pie crust pastry into a rectangle and spread it with the softened butter cinnamon mixture, rolled it up on the long end and cut a few slices off the end. You will see the result on the sheet tucked in at the edges.

The pinwheels using this method were too small. So, I unrolled the prepared pie crust, and re-rolled it along the narrow edge, which gave me the perfect sized pinwheels.

Then I proceeded to unroll 2 more pie rounds, and without rolling them out to make them any larger, I just spread them with the butter, cinnamon mixture and rolled them up again. Then I sliced each roll into 1/4″ circles. You will lose about an inch of dough at either end as they will not be perfectly formed into circles, but you can always bake these separately.

I next prepared the base of the pie by rolling 2 pie crusts into the shape of the sheet pan and transferred the dough to the non-stick sheet pan.

Lastly, I topped the pie with sliced Granny Smith apples tossed in lemon juice and then cinnamon, sugar and a bit of flour and laid the apples on the sheet. I tried to keep the apples at the same height in order to keep from creating mounds anywhere on the sheet.

I then laid the pinwheels on top of the apples, and interestingly, had the perfect number of swirls when laid touching each other.

Did I like the taste and texture of the pie?

Well, my first taste was when the pie had cooled but was fresh out of the oven. It was not WOW! A bit of a disappointment, but having put the time in to make it, I decided to slice the pie along the pinwheels and filled a platter with slices of the pie that were about 2 bites each. This is about as much as I like of any dessert, so this was fine.

Then I covered the platter with plastic wrap and left it until the next day, when I decided to try it again.

I liked it much better the second day. The tartness of the apples and the flaky, but soft, pie crust was perfect.

I’m sure this is not how it was to have been made, but I wanted to go with pre-made pie crust and be able to put everything together in record time. And it’s good.

Would I make it again?

Probably, now that I know what I need and how to make it. It’s a nice solution for a dessert table or a buffet and can be made year around. A good family gathering dessert.